Is This for Real?

The Problem with Pork

If you believe the newscasters and pundits, pork is our most troublesome meat. Not all pork gives us indigestion. The kind kept in barrels causes the problem.

In a strange village on the banks of the Potomac River there resides a tribe of transient, wanabee farmers. Their agricultural abilities are questionable at best. Usually about the only thing they can raise is a disturbance. Give credit where credit is due. They are darn good at raising disturbances.

Semiannually the tribe performs the most sacred ritual passed down by their forbearers. Properly preformed the ritual wards off evil voters, thus ensuring a long and prosperous career. This ritual is, of course, the filling of the pork barrels. The warrior who fills the most and largest barrels is the envy of the entire tribe.

Some less able members of the tribe struggle to fill even a small keg with that magical meat. These members often become rogues. They live at the edge of the village, sniping at their more successful brethren as they load their barrels to send home as peace offerings to their constituents. Voters often mistake this sniping as being motivated by a dislike for pork. In reality it's often nothing more than a king size case of pork envy. It is the new American way. The "have nots" attack the "haves."

How did this quaint ritual begin? Long, long ago voters across the land selected one of their own to venture to the banks of the Potomac to form the tribe now known as Congress. The chosen ones found life could be good in the new village. They wanted to stay. There was a problem. Every two or six years the tribesmen had to go home and plead with their fellow citizens for renewal of tribal membership.

Word of the good life on the Potomac reached home. Upstarts attempted to divest the tribesmen of their birthrights. Sometimes the people back home just didn't seem to care much about renewing the memberships in the Potomac Tribe. Something had to be done to change that. The voters must care.

The more ingenuous members of the tribe started shipping barrels of pork home to their constituents. When the time inevitably came for membership renewal, the savvy tribesmen pointed out that only renewal of their memberships could assure the uninterrupted flow of pork. These tribesmen were not above suggesting that a little gratitude for pork past would be in order. The pitch worked. Memberships were renewed.

If it ain't broke, don't fix it. Just perfect it. Over the years the tribesmen fine tuned the delivery of pork to the constituents back home. Pork barrel politics grew to an art form. Constituents sometimes saw juicy roasts and hams delivered to neighboring districts, while their own shipments contained only rinds and shanks. This could lead to the revocation of a tribesman's membership. The example was not lost on the survivors.

Pork turned out to be the most fiendishly addictive substance ever discovered. The survival of the tribesmen depended on their ability to satisfy the appetites of their constituents. This gave rise to an ever expanding flow of pork to the addicts back home.

The truth is, pork is a magical meat. It only looks and smells like pork when it's on someone else's table. When on the voters' own tables it looks like bread and butter. Constituents find no hypocrisy in demanding their own bread and butter while decrying the wasteful shipment of pork to other communities.

For so long as pork retains that magic, the pork barrels will roll. Until the recipients of the pork recognize it as pork, the demand for pork will continue. For so long as there is a demand, there will be an ample supply. Until voters recognize their own pork and fire the congressmen that ship it to them, pork will prosper. We can fire only the congressman that ships us our pork. We can only complain about the rest. Congressmen could not care less what other voters think of them, as long as their own constituents are content.

Don't blame congressmen for pork barrel politics. They are only giving in to that most basic of human instincts. They do that which is in their own best interest. How many voters would be above filling a few pork barrels if their jobs depended on it? For so long as it serves a congressman's interest to ship barrels of pork, the shipments will continue. The voters best cast the hams out of their own eyes before attempting to cast the chop out of the eye of a congressman.

Send comments or questions to: admccallum@columnist.com

Government is not reason; it is not eloquence; it is force.
Like fire, it is a dangerous servant and a fearful master."
-- George Washington

Permission is hereby granted for copying the above excerpt for free non-commercial distribution, provided the copyright notice, and the author's E-mail address or the address of this web site, are included. Requests for permission for other use may be directed to the above E-mail address." 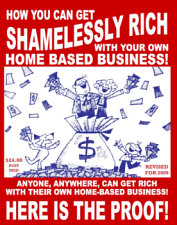