The Bible Tells Them So

"Jesus loves me, this I know, for the Bible tells me so." The religious indoctrination of children often begins with the lyrics of this song, which unfortunately instill in them an uncritical attitude that many will take to their graves. The sentiment of the song is that children need only the mere say-so of the Bible in order to know that Jesus loves them. From there, they go on to believe that anything the Bible says has to be true, because... well, because the Bible says it.

We constantly see the-Bible-tells-me-so syndrome in the articles of biblical inerrantists published in this paper. Everette Hatcher and Michael Bradford believe that a king named Darius the Mede conquered Babylon and reigned over it for at least a year. Never mind that this belief is contrary to what Babylonian and other extrabiblical records of that time say, and never mind that no extrabiblical records that mention Darius the Mede have ever been found. The Bible says that "Darius the Mede received the kingdom [of Babylon]," and so they believe it. The Bible tells them so.

Now, in this issue, we have Matt Bell joining the ranks of those determined to defend the historical accuracy of the Bible (see pages 2-3). As readers will see, Bell will be sort of a novelty, because he just recently abandoned belief in biblical inerrancy. Readers will also see that he nevertheless has carried with him enough sympathy for his former position that he still wants to defend some rather fabulous biblical claims. He apparently believes that the creator of the universe once took an intense interest in the personal life of a biblical patriarch named Abraham and later decided to test his faith by commanding him to offer his son Isaac as a human sacrifice. Bell seems to think that all the fanciful tales about such biblical characters as Noah, Isaac, Moses, Rahab, Samson, and David were actual historical events. He believes all these tales not because they are documented and confirmed in enough records of the time to make them credible; he believes them for no discernible reason but that the Bible tells him so.

If everything were listed that people believe for no other reason than that the Bible says so, this entire edition wouldn't be able to contain the list. They believe that "God" created the world in six days. They believe that the human lifespan was once measured in centuries rather than years. They believe that a man named Noah once built a boat 450 feet long and took aboard it his family and specimens of all animals on earth to save them from a worldwide flood that covered the highest mountain on earth. They believe that humans speak different languages because at a time when all people spoke the same language, God confused their tongues because they were trying to build a tower that would reach into heaven. They believe that Moses and Aaron once performed such signs and wonders as changing all the water of Egypt into blood and parting the water of the Red Sea so that some escaping slaves could cross on dry land. They believe that Moses then spent 40 days and nights on the top of a mountain chatting with the god who had enabled him to do all these wonders. They believe that Joshua's army made the walls of Jericho collapse by marching around it and blowing trumpets. They believe that a man named Elisha once raised a widow's son from the dead and later made an axehead float in water. They believe that three men once walked unharmed through a fiery furnace that was so hot it killed the men who had thrown them into it. There just isn't enough space to list all of the fabulous tales that many people believe for no other reason except that the Bible tells them so.

The disgraceful thing about their acceptance of such tales is that they are able to recognize that comparable stories in nonbiblical documents from ancient times were just fabulous claims made by superstitiously gullible people. The Roman historian Tacitus, for example, claimed that the emperor Vespasian once healed a blind man and a crippled man by putting saliva on the blind man's eyes and by touching the crippled man (The Histories, Penguin Books, 1995, p. 272). Suetonius, another Roman historian, recorded the same claim (The Twelve Caesars, Penguin Books, 1989, p. 284), and both historians claimed that these miracles were witnessed by many people (Tacitus, p. 273; Suetonius, p. 284). In Wars of the Jews (6:5.3), Josephus claimed that a heifer being led to the temple altar gave birth to a lamb, that a gate to the temple that required 20 men to open and close it had mysteriously opened of its own accord one night, and that soldiers and chariots were seen in the clouds surrounding the city of Jerusalem. He claimed that the latter was seen by too many people to doubt it.

Do biblicists like Bradford, Hutchinson, and Bell believe tales like these? I seriously doubt that they do, but if these claims had been recorded in the Bible, they would all accept them without any more proof than that the Bible told them so, yet when such tales are recorded in other books, they are able to look at them more objectively, apply sensible standards of literary criticism, and reject them as real historical events. An appalling double standard is used by almost all biblical fundamentalists. They would never consider believing outrageous claims made in the Book of Mormon, the Qur'an, the Avesta, or the Hindu Vedas, but if the Bible says that Moses parted the Red Sea, that a donkey talked to a man, that three men walked unharmed through a fiery furnace, that Jesus was born of a virgin, that Jesus walked on water, that Jesus raised Lazarus from the dead, and that Jesus himself rose from the dead, they believe it. The Bible tells them so.

Why the double standard? Maybe some inerrantist reader will tell us why. 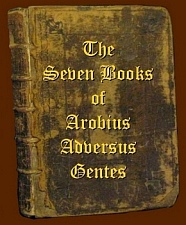